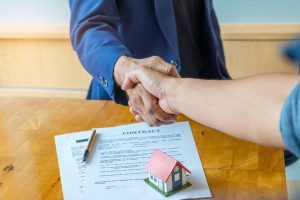 You shouldn’t just plump for the first estate agent you see in your local directory, you should put them all through a series of tests before choosing your best bet.

Ask around at work and in your social circle for recommendations. If someone’s recently moved then they’ll be able to tell you what they thought of their agent. If the same names crop up (in a good way), then focus on them. Similarly, make notes of the agents behind the “sold” signs in your area – they’re doing something right!

When you’ve got your shortlist, visit the agents in person and pretend you’re looking for a house just like yours. See how the agent describes these places and ask yourself if you’d like your home to be described and marketed in that way.

Three is the magic number! Any more and you’ll start to get confused and any fewer and you won’t have a middle valuation to choose! Avoid the highest of the three valuations as it could be the agent trying to reel you in. You don’t want the lowest number either, because you could be short-changing yourself.

When you’ve chosen your agent, review the contract before signing

You don’t have to sign it just because it’s there! If there’s anything you’re unsure or unhappy about, ask about it or see if you can change it.

Keep an eye on your agent’s performance

Towards the end of your contract, assess the estate agent’s performance. Ask yourself how many viewings you’ve had and how they went. Has the agent kept in touch; called you with a few offers, even if they’ve been low-ball?

You should also have received feedback from your agent. If you’ve not had many viewings, or had quite a few but no serious offers, then your agent needs to give you the feedback from viewers. It could be that several people have said the price is too high; in which case talk about a new amount and try again.