Home | News | Have a Stylish Halloween

Have a Stylish Halloween 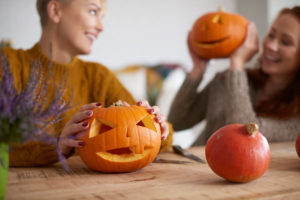 It’s that time of year again; the nights are drawing in, the leaves are falling and terrifying supernatural creatures come out to prowl the earth… But enough about estate agents in autumn; if you’re going to market in October, you need to thrill viewers without sending them running.

Here’s how you style your way to a Halloween sale.

Focus more on the outdoor decorations

If you’re usually that house with the crime scene tape and bloody-handprint window clings, you’re going to have to give it a rest this year. Your viewers aren’t expecting a film set or an escape room experience, they’re looking for somewhere to live.

You should nod towards the season instead, by placing pumpkins, gourds, and autumnal-looking leaf wreaths on your porch and doorstep. You need to show that you’re fun and friendly, rather than deeply sinister or, worse, cold and boring.

A good tip for your pumpkins is to use fake ones if they’re going to be on display for more than a few days. Otherwise, you end up with a squishy, smelly mess.

Having said that, you can decorate a little bit indoors

No, that doesn’t mean the window clings can come out of the loft. Use some autumnal decorations, like pumpkin spice candles, soaps, subtle fairy lights in the shape of leaves and so on.

One good idea is to place a bowl of classic Halloween candy corn on a table, or maybe a bowl of crisp apples.

If you’re placing pumpkins and other decorations outside, make sure your porch and garden are well-lit so that no-one falls over. Similarly, it might be an idea to use flickering LED lights in any lanterns or gourds instead of real candles.

Get the photographer in before you decorate

Obviously, you want your place to be snapped up before the witching hour, but just in case it’s not, make sure people can’t see that you went to market in October, as it’s not a great look in January.

Clean up on November 1

We’re all guilty of leaving those spider webs up and those intricately-carved pumpkins out a bit too long. Not this year, though. Set aside some time on the days immediately after Halloween to tidy up and remove all evidence of spooky goings-on.