Home Cinemas are a Seller! 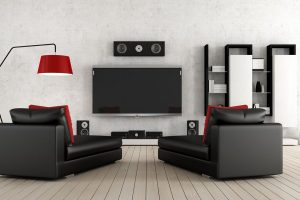 People no longer have to go to the cinema to catch the latest blockbuster as they can watch it in their own home with a streaming service. Cinemas are finding their attendances are falling, with UK film buffs preferring to pop their own corn and stay in with friends to watch new releases.

Two thirds of Brits prefer to stay at home

AppliancesDirect.co.uk asked 1,000 Brits whether they preferred to go to the cinema or stay at home to watch films and a surprising 63% said they preferred the home experience. Just over a third (35%) said they have a room that’s given over to a home cinema.

The stay-at-home film fans said that cheap streaming services and the rising costs of cinema visits made a home cinema more appealing.

How do you create your own cinema?

First of all, you need to identify the ideal space within your home. This could be a spare room, a garage or even a basement. The space needs a bit of privacy – you don’t want kids, dogs, chickens or the neighbours trotting past the screen on their way to the garden. Think about how immersive the space is.

You also need to think about comfort. An easy fix here is thick rugs, lots of bean bags and soft fairy-lights to provide a muted glow once the main lights are out.

At least you need a reasonably big TV, but most people don’t stop there. The survey found that 43% of respondents with a home cinema had a 4K TV while just under a fifth had a Blu-ray DVD player and 17% had additional speakers to enhance sound. A few respondents had gone so far as to buy a projector, but this might not be necessary these days.

Once you’ve got the basics nailed down, you can turn to the luxuries. If you install a small fridge so you can have easy access to cold drinks, as well as a popcorn machine, then you’ll never have to press pause again.

You might not really fancy the idea of a home cinema. Maybe you’re a die-hard cinema-goer who makes a real event out of a trip to the flicks. However, if you’re planning to sell soon, adding your very own Odeon could seriously boost your chances of selling and your selling price. Plus, it costs much less than building an extension!