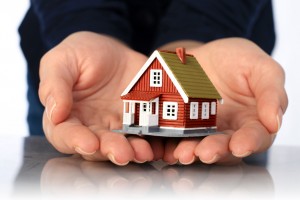 Everyone’s dream used to be a two-storey, three or four-bedroomed house with two (at least) reception rooms and a huge kitchen. However, market forces and price rises have meant that many buyers have to start off small and work their way up.

There’s a whole new trend in the property market based on small flats and houses, and while they’re easier to sell than they used to be, sellers and estate agents can still help things along.

Every square foot has to justify itself

Space-saving appliances and features are vital to attract buyers. Just because someone is looking at a small house doesn’t mean they have a small life! If the house has a lot of well thought-out, ergonomic space-saving features then people will be able to see themselves living there for more than just a few years.

Fold-out furniture – examples include a fold-out (or fold-down) kitchen table, attached to the wall. It can be folded out of the way to free up floorspace. For workspaces, fold-out desks can work quite well, especially if people are using laptops.

Customised, built-in bookshelves – a mixture of sizes means that buyers can store more than just books.

Living on the ceiling – hanging pots and pans from the ceiling is a great idea. Old-fashioned clothes airers are on-trend, too. A novel idea is to get jars with magnetic lids and “stick” them under metal strips or metal shelves.

Big up the smaller bills

Energy isn’t getting cheaper and so smaller houses means smaller utility bills and so installing more energy-efficient features can really draw in the punters. Make sure the estate agent mentions them to viewers.

It’s always important to have a clean, uncluttered house or flat when selling, but in the case of a smaller property, it becomes vital. Sellers should be ruthless when looking at the rooms – removing free-standing photo frames, toys, bric-a-brac and even smaller items of furniture like magazine racks.

Before going to market, smaller rooms need to be decorated in a neutral, minimalist manner. No busy prints, dark (or even bright) colours or large throws. Simple decoration always makes a space look smaller.

Remove throws and blankets from sofas and beds, as they draw the eye to them and this makes the walls seem to close in. Aim for light and airy.