Tradespeople Cashing in on Third Lockdown 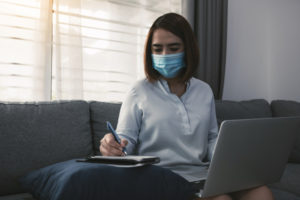 More than eight out of ten tradespeople in the UK have seen their earnings increase significantly after the third covid lockdown came into force in January 2021.
According to recent research by business insurance provider Direct Line, 82% of the UK’s tradespeople have earned more than usual in the period between January and April this year. A third have earned 11-20% more than usual, with 54% taking on more work, and around 10% are fully-booked up until the end of 2021.

On average, Brits saved £1,800 since the start of the covid pandemic and 45% of these savers spent their stash on home improvements, especially since April 2021.
Tradies welcomed this extra work, with 14% saying their workloads had hugely increased and 40% saying theirs had risen somewhat. This increase in demand may be around for a while, with 10% packed out until the end of the year and 24% having a full schedule until the autumn. A few tradespeople (12%) say they’re feeling a bit burned-out even though the extra work is welcome.

Where has the demand come from?

Despite a turndown in work hours and job uncertainty, the lockdown also meant a reduction in spending in pubs, shops and restaurants, as well as on travel and holidays. The average Brit has saved £1,803 since last March and almost half (45%) of them have decided to plough these funds into the home improvements they’ve been putting off for ages. Another 20% are planning to spend their savings on their homes over the next 12 months, which is reassuring for the nation’s tradies.

What are homeowners asking for?

Almost one-fifth (18%) made improvements to their interiors while 14% have had work done on their gardens, fencing, sheds or driveways.

What are the nation’s hotspots?

The UK’s top three cities for home improvement spending have been Norwich, Liverpool and Nottingham, among others:
Norwich – 56%
Liverpool – 55%
Nottingham – 54%
Southampton – 54%, and
Birmingham – 54%.

Tradespeople are investing in their businesses

Many tradespeople are taking bold steps to prepare their businesses for this lasting consumer demand.
As a result of the increase in demand, lots of tradespeople have invested in new tools (39%), taken on an apprentice or extra staff (30%) or buying a new work van or vehicle (24%).