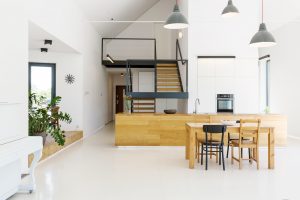 Most of us have seen open-house viewings on TV shows and films from the US for years, but it’s only very recently that they’ve started to catch on in the UK.

If you don’t know what an open-house viewing is, it’s a viewing which several potential buyers can attend at the same time. There’s a host – either the estate agent or the vendor – who’s there to answer questions while the viewers take in the property at their own pace.

It saves vendors and agents time

If you havefive househunters through the door at once, this means you only have to clean, stage and show people around once instead of five times. In addition, if one or two people pull out of the viewing, three or four will still turn up.

If the viewers are there on their own with an agent then Britishness creeps in and they feel compelled to walk around with the agent, humming and hawing and making silly puns. If there’s quite a few people looking, everyone is less self-conscious so they take their time and can talk to their partner a bit more openly. Also, more open-house viewings last for an hour, so viewers know that they can linger rather than worrying about wasting the estate agent’s time.

There’s more chance of an offer

If you know for certain that there’s four other interested parties because you’ve seen them, then you’re more likely to make a decision and an offer sooner rather than later.

Buyers can weigh up each other’s reactions

If you’re milling around with other people then you’ll hear them criticising the feature wall that you happen to quite like, but you’ll also hear someone else wondering if that’s a patch of damp near the back door or asking about the planned development nearby that you hadn’t heard of.

What you should ask the host at an open-house

You should ask how long the place has been on the market, as well as the reasons for the sale. You also need to know what the energy rating of the property is and what the bills are like. It’s also a good idea to find out about the neighbours if you can.