Home | News | Why We Need Floorplans

Why We Need Floorplans 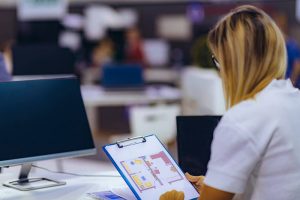 Although we all expect to see floorplans when we look at property specs, either online or in hard copy, they’re actually a recent thing with estate agents. They used to be only for the biggest, grandest of homes, with many rooms and even wings. Now, however, even humble one-bedroomed flats have floorplans, simply because they work really well.

Good floorplans include measurements so that people can see how big rooms are and also how they fit together within the property. Measurements were originally included in the written description only, and while this information was generally correct, a series of numbers didn’t always help people to visualise a space.

A blueprint for the future

Floorplans also feature a compass marker so that potential buyers can see which rooms face north and south. This can help them to plan future living plans like installing solar panels, knocking two rooms into one or working out which rooms will be too bright in the mornings. The “flow” of the property, as well as how different sections are connected, can be forgotten once someone’s got home (especially after several viewings), so an accurate floorplan serves as a reliable reminder of the place.

A measure of the property’s worth

The buyer can also see the overall square footage of a property, so they can see how much house they’re getting for their money. The UK has traditionally sold houses and flats based on the number of rooms rather than the overall area, but in recent years rooms and property footprints are getting smaller. A four-bedroomed house may only take up the same space as a three-bedroomed property and people need to see this clearly before deciding to even view, let alone buy. Good-quality floorplans can detail storage areas, as well as large hallways and landings, which can help to make up for relatively small rooms in a property.