Home | News | What Does More Working from Home Mean for the Property Market?

What Does More Working from Home Mean for the Property Market? 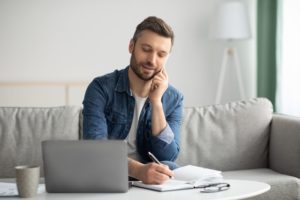 Since last March, many households have had to get used to working and learning from home, which has led to people looking at their nooks, crannies and end-of-garden wildernesses in a new light. Those desks and laptops have to go somewhere, right?

This shift towards working from home more is here to stay, even after the pandemic is declared over, so a lot of house moves are taking this new way of living into account. How then, is more WFH affecting the property market?

More buyers are looking for an extra room

After a year or more of making sure your Zoom meeting doesn’t clash with a French lesson, lots of buyers are looking for properties with at least one extra room, or a landing space with desk potential.

Many estate agents are reporting that lots of the properties they’re valuing and selling right now have home offices – cramped corners or not – and that many homeowners are moving because they’ve decided to WFH more.

There’s no way this won’t have a knock-on effect on property prices and by far the steepest rises are to be found in the leafy suburbs of cities as people are thinking of their environment over their commute. Previously, people took the distance between home and work into account when looking for properties, but as they may only be commuting once or twice a week now, this is less important.

Building garden offices has, as you might imagine, has skyrocketed in popularity in the last 12 months and so buyers are looking for properties with existing offices or with the potential for one.
If your property has a garden office – even a small one – then not only will you find it easier to sell, but you should get double the amount of money you spent on it in the selling price. Offices with insulation and electricity are best, of course, although some buyers will be happy to work with a more primitive space once they’re in.

Some buyers are relocating altogether

Lots of people have embraced working from home with immense enthusiasm and so they’ve decided that there’s no more cramped city living and commuting for them anymore. They’re heading for the hills (or the regions, at least) for more space and an easier pace of life while still earning a crust. As a result, there’s a big uptick in rural properties with a bit of land, as well as larger townhouses rather like the ones found in and around Cheltenham.