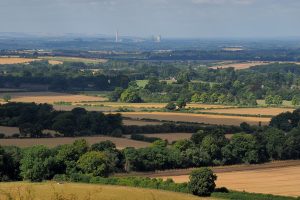 Last month saw the government announce plans to create 14 garden villages across England in a bid to ease the country’s housing crisis. The 14 villages will offer between 1,500 and 10,000 homes – up to 48,000 in total – as well as the associated infrastructures. The villages won’t, according to government, merely be tacked onto existing towns or cities.

The plans currently propose to create new settlements in Deenethorpe, Northants, the Oxfordshire Cotswolds, Halsnead in Merseyside, Longcross in Surrey, Dunton Hills in Essex, Culm in Devon, Long Marston in Stratford-upon-Avon, Welborneand Handforth in Hampshire, Bailrigg in Lancaster, West Carclaze in Cornwall, St Cuthberts in Cumbria and Spitalgate Heath in Lincolnshire, as well as Infinity Garden Village in Derbyshire.

Interestingly, there’s no overarching design or blueprint for the villages, apart from looking good, being high quality and being able to cater for local housing needs. The project will receive £6 million from the government over two years to help with the infrastructure each village will need – GP surgeries, school places, transport facilities and so on.

Housing stock will also be boosted by plans for larger garden towns in Somerset, Buckinghamshire and Herefordshire, as well as existing plans for garden towns and cities in Bicester, Didcot, Aylesbury, Basingstoke, Taunton, Ebbsfleet and north Northants.

All this building will result in 200,000 new homes, although the plans aren’t without opposition. The planned garden town on the Essex-Herts border will, say critics, subsume the existing villages of Gilston and Eastwick.

There’s always concern and criticism about large-scale building plans like this, especially when green belt land will be used. However, there’s no denying that there’s a housing supply crisis in the UK, so if these villages, towns and cities are built with reason and sensitivity to their surroundings, they will go some way to filling the gap. The fact that they will also help many first-time buyers is sure to be a big draw, too.

While 200,000 new properties won’t be a cure-all, this is a serious step towards a solution and it should also go some way to making up for the government’s lack of housing action in recent years.

Copyright for the image within this blog post is owned by ‘Richard Leighton’, and has been licenced for use on this blog post through Big Stock Photo (stock photo ID: 105205637). For questions relating to this image please contact the copyright owner directly.