Home | News | The Many Faces of Damp

The Many Faces of Damp 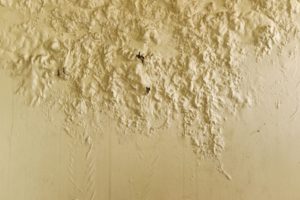 Well, the six most common types of damp, anyway…
Your home could be affected by one or more types of damp and each type has its own causes, symptoms and treatment, so if you see strange patches on walls or floors, you need to know what you’re dealing with.

Condensation is the most common type of damp and is caused by damp air coming into contact with cold surfaces and condensing. It’s associated with poor ventilation so can sometimes be solved by opening your windows more or drying your clothes outside on a line.
You’ll often find it in corners, behind furniture or in other places where there’s little air movement. It can present as black mildew patches which can smell musty and it can be harmful to your health, especially if you or someone you live with have asthma or similar.

Rising damp is caused by water coming up from the ground underneath or next to your walls. It comes up through the bricks and mortar by capillary action and it’s most often found in basements and ground floors. It can also creep into houses which have had their original floors replaced by concrete.
It can show as rotting timber, such as floors and skirting boards, or as light yellow or brown deposits that look almost fluffy, or like a tide-line.

Penetrating damp is caused by water being unable to escape quickly enough, so it collects where it builds up, leading to damp patches in walls and floors.

Chemical damp is often caused by hygroscopic (water-attracting) salts that have contaminated plaster in walls. These salts draw water from the air and it accumulates in the walls, causing damp patches. This could have been going on for decades or it may be more recent, but once it’s started, it gets worse.
You may see it on chimney breasts in particular, but it can happen anywhere where there’s plaster and it usually looks like patches of brown stains.

Faulty or inferior plumbing can cause damp patches if the pipes aren’t joined together well enough or if they’re made from cheaper metals that corrode or split, causing leaks.
You might see smaller, localised damp patches and this type of damp is common in houses with underfloor heating pipes. There may also be some bubbling of the plaster around the edges of the damp patches.

Damp from floors and walls drying out

If your home has had a flood or plumbing work in the recent past then you might see damp patches caused by water deep in the walls and floors making its way out. This process can take months, but you can speed it up by using dehumidifiers, heaters or by increasing ventilation. This type of damp doesn’t tend to cause staining but it’s best to help it to dry out as quickly as possible.